Posted on September 11, 2018 by chappelltemple

It’s hard to believe that it’s been seventeen years since that day, for I suspect that everyone over the age of 25 can well remember where we were when the first reports began to crackle over the radio.  I had just dropped my wife off to teach for the day, in fact, and was headed back to my office when I heard the news of a terrible plane accident involving the World Trade Center in New York.

It sounded awful, to be sure, but when I got home and turned on the television it was even worse.  For it wasn’t an accident at all, but a deliberate attack, confirmed when a second plane crashed into the second of those twin towers.  Meanwhile, at her school near NASA, Julie noticed that Air Force fighter jets had been scrambled and were buzzing loudly overhead.  And as the hours wore on, the full enormity began to flow over all of us as well.  For September 11, 2001, was not just a day to remember, but a day that changed America forever.

Flying to Boston this past week, for instance, I was reminded of how much air travel morphed after that fateful day.  For even with TSA Pre-Check—and there was no TSA before 9/11—it’s still much tighter. So no matter where you are going—to a conference, on a vacation, to see your grandchildren, or to meet old friends—no matter how hopeful or excited you may—there’s still that slight tingle of anxiety when you go through the line, isn’t there, still that reminder that our security in this world is never quite completely guaranteed.  For indeed, we never really know when we too may be called to eternity, just as the people who got on those planes seventeen years ago this morning had no idea that it would be the last day of their lives on this earth either.

Likewise, that moment changed how we view good and evil, I think.  For on 9/11 whatever innocence about humankind that we might still have had, whatever fancied ideas about the world that we might have yet indulged, whatever comfort we might have felt in our denial of the power of bad things to affect us, we were inextricably reminded that there is something very wrong in the world. Indeed, evil once more reared its ugly head and stared us down, face to face.  For what 9/11 revealed is that evil not only exists–the “mystery of iniquity” as St. Paul called it in 1 Thessalonians 2.7—but that we live in conflict with spiritual forces of wickedness that are pledged to destroy us.

But what 9/11 also taught us was that even in the presence of pain and poignancy, of turmoil and tragedy, God is with us as well.  For in the words of 1 Corinthians 15, we have not believed in vain, our faith is not futile, and it is not only for this life that we have hope in Christ at all. Such is not to minimize the fact that almost 3000 people died in the 9/11 attacks, of course, and countless more had their lives forever altered by the loss of their loved ones.  But the hope we have is that God knew every one of them by name—just as He knows us– and eternal life did not end that day for any of them.  For centuries ago, the tragedy of the cross was followed by the triumph of the empty tomb. And the good news is, it still is.

On this day of remembrance, take a moment to reflect back on where you were that morning that changed America.  But just as importantly, ask yourself as well just where you are today when it comes to God. For if He isn’t your real security in life, the truth is, you haven’t got any at all. 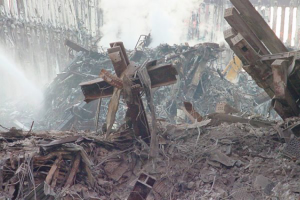 2 Responses to Seventeen Years Ago