For decades after it was built it was known as “The Bridge to Nowhere.”  But by the 1970s for those of us who lived in the small burg of Brazoria, west of the river, it was actually our lifeline to the other side, where Lake Jackson offered downright cosmopolitan attractions, including the closest McDonald’s to our little town.   What’s more, driving over it was almost like going through a time tunnel.  For built in 1939, the bridge had seen little changes since the Brazos River itself was a far more mighty waterway.

Imagine our concern, thus, when they began to repaint that old truss bridge and for months, traffic was restricted to one lane only, alternating between going east and west.  Then one lovely spring day, the job was done, and the old bridge proudly wore a beautiful new grey coat of paint.  Like the rest of our neighbors, thus, we were excited indeed that our traffic patterns were ready to return to normal.

Until, that is, we discovered that the beautiful grey paint was only the primer coat.  Which meant that our waiting was not yet done and the inconvenience of changing our commutes was still not over.

And in a like manner, I have a feeling that many of us have been anxiously waiting for word of a change in our daily routines right now, too, hoping that somehow our time of separation is about to be completed.  The bad news is, however, that at least in our area where the infection rate continues to rise, we still have several more weeks to go.

But the good news, of course, is that just as that bridge eventually got its final coat of paint and our lives got back to normal, this rather strange season too will eventually come to a close and we’ll find our way back to our familiar routines once more as well.

In the meantime, the words of Ecclesiastes 7.8 may be helpful here: “The end of a matter is better than its beginning, and patience is better than pride.”  For indeed, after seventy years of service, the highway department finally built a new bridge in 2010, making the iron truss structure still standing beside it truly “The Bridge to Nowhere,” though it did make it onto the National Registry of Historic Places.

Whenever the end of this pandemic comes, I have a feeling we’ll all be more than ready.  Until then, we’ll continue to follow the guidelines even as we practice the words of St. Paul in Galatians 6.9: “Let us not become weary in doing good, for at the proper time we will reap a harvest if we do not give up.”

For just in case you’re wondering, that old bridge really did look great with a new coat of shining green paint. 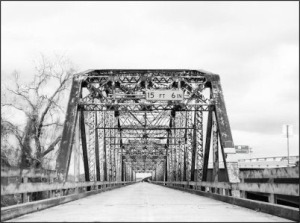 3 Responses to COVID Contemplations (April 20) – “A Primer in Patience”