Things are looking up.  Or at least I have been doing a lot of it over the past week.  For on Wednesday, we parked outside the mall to watch as the famed U.S. Navy Blue Angels did a flyover saluting health care workers in Houston.   Then on Sunday afternoon, thanks to a tip-off from a friend, we perched in another parking lot to get a view of some of the nearly 30 vintage aircraft from the Lone Star Flight Museum that soared through the skies to commemorate all those heroes who bravely sacrificed to end the Second World War seventy-five years ago.

You could hear the difference, of course.  For those historic planes, including B-25 bombers and P-51 Mustangs, thundered loudly overhead, and from below you could practically see their propellers wildly spinning.  On the other hand, the F/A-18s flown by the Blue Angels quickly roared through the blue skies, going so fast that the sound barely had time to reach where we stood below.

In either case, however, the flyovers had the same desired effect on all those who saw them:  awe and encouragement.  And maybe that’s why all throughout the Bible we are told to lift up our eyes and look to the heavens whenever we are confused or anxious.  For when we take our eyes off of the circumstances around us, we are reminded that there is a much wider world beyond whatever may be our immediate focus.

The psalmist put it this way, for instance, telling those pilgrims on their way to Jerusalem to lift up their eyes to the hills. (Psalm 121) But then he asks, “From where does my help come?”  For, you see, it was not the hills themselves, filled with statues of idols and pagan altars, but the Lord of the higher heavens who is our helper and keeper.

Likewise, Jesus Himself told His disciples in Luke 21 to watch for “the Son of Man coming in a cloud with power and great glory” one day.  Or as an old country-western hymn used to put it, “keep your eyes upon the eastern sky, lift up your head, redemption draweth nigh!”

That’s why cathedrals and places such as Christ Church were built with such high ceilings and lofty angles, with stained glass filtering the sun’s rays in all kinds of colors, in fact:  they were meant to draw our eyes upward.  For when we do just that, we may find that our spirits too have been lifted.

Keep looking up, friends. For you never know what you may find in the heavens.  You may even discover that not all angels are blue. 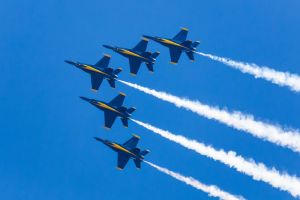